The joint Seminar WFTU-GFIW took place in Baghdad on 30-31 July under the topic: The participation of women in the trade unions and in the workers’ movement.

The WFTU and the General Federation of Trade Unions in Iraq held a two-day seminar in Baghdad, Iraq, with the participation of women trade unionists from Iraq, Palestine, Lebanon, Iran, Syria, Egypt, Sudan, Bahrain and other countries.

During the opening ceremony, the representative of the Ministry of Labour, Mr Basem Abed Zaman greeted this important initiative. The President of the GFIW, brother Sattar Danbous Barrak, also addressed a welcome speech.

The WFTU was represented by Sousan Abdel-Salam, member of the WFTU Women’s Committee and Maria Barouti, responsible for the Arab countries from the WFTU Central Offices.

The delegates and women cadres who participated held rich debates and suggestions in order to empower the female workers action and strengthen their position in work, society and trade union life.

The seminar concluded to recommendations for concrete initiatives to be taken in the near future for the interests of the working women in Iraq and all Arab countries.

A cultural event was held to honor the international participants and the local women representatives at the GFIW headquarters. 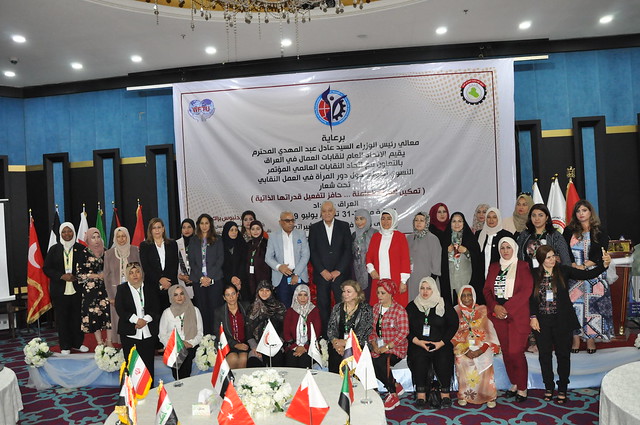